So I woke up to a beautiful sight after a wonderful night of sleep. I can’t hear crap outside this vehicle and I love it! No dogs barking, no kids screaming… I don’t even fall asleep with the t.v. on anymore… And I have been doing that for 15 years now because the city life is so noisy. It’s better to have a constant noise in the background then being woken up by random noises outside. 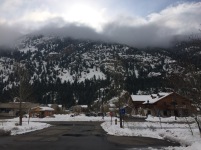 The lady at the restaurant told me to get up early and look for the big horned sheep and mountain goats. She said they don’t like to come out in the snow but I may get lucky. Well, I didn’t see any but will definitely visit again and try to snap some pictures of them. She said they walk all along the mountain and sleep in little caves and burrows in the mountain. Amazing! I wish I got to see one…

So anyway, I hit the road and started making my way into Denver. Now, I really don’t want to visit any cities, I’ve had enough of them for 15 years but of course, my computer started acting up. That is why my blog posts have been so sporadic and late. My idea is to get up everyday and blog before I start traveling. Well internet connectivity is an issue, even though I have a hot spot. And I found out last night my computer was completely f%^$ed. Every time I tried to open system preferences or anything to do with iTunes my computer would crash. I was not happy this morning to say the least.

So basically I went from this…. 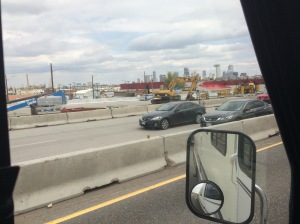 You see why I am upset… lol… So, I counted my losses and headed to a MAC store. I didn’t take any pictures because why would I bore you with what you see everyday.. I ended up in this horrific mall. I realize now that the reason the energy sucks out of my body when I enter these so-called Corporate fun lands is because I hate them. I hate malls and shopping in them so much my body physically rejects them by becoming lethargic and stressed out. I don’t think I am the only one here.

I also never understood why they pump oxygen into casinos to keep you awake and gambling but they don’t do the same in the malls. Folks, look around when you are at the mall again. Notice most of the people’s expressions. They do not look happy, they actually look like zombies from “The Walking Dead,” wondering around waiting for someone to tell them to buy something. That is all we are to these Corporate establishments, consuming zombies. The one store that makes the most racket gets the most zombies attacking their supplies.

Anyway, enough of my ranting. So I went into the Apple store only to be told they couldn’t see me until 5:30 pm. It was around 1 when I got there. So not only did I travel all the way to the store, my only option was to talk to a representative on the phone and sit in the store. I can’t seem to get away from these damn phone representatives. But the man there was very understanding and got a live person talking to me on the phone without going through all that automated crap.

Well, long story short, after 3 1/2 hours on the phone, my Mac is fixed and running at full capacity… I guess. I found out the reason my computer was messed up was because it was not downloading the system updates properly. The guy on the phone told me it was because I had a bad internet connection, where ever I lived.

I had Time Warner Cable folks! The worst company that has hit this planet! Not only did I spend days on the phone with them over the past 6 years, their horrible service screwed up my computer also… If you have them… get rid of them! They are horrible and not worth it! I’m still paying for using those incompetent idiots for the past 6 years! Get satellite or Verizon, trust me, Time Warner sucks horribly! I think I will throw a party when they go out of business, which they will eventually. Go streaming T.V! Knock out the stupid bundlers and send them on their way… We don’t want them anymore!

So anyway, a day wasted but my computer is back up and running… So I will try to forget this day happened as I travel to Nebraska… I found another truck stop type situation and dry camped there for the night…

I do have a confession to make though… I had to refill the resources in my RV and dump today… I was almost out of water, so I had no choice… So the dry camping was successful for 4 days, I think that’s pretty good. If I don’t take a shower everyday, I could stretch it out to like 7 days… another task we will tackle in the future… And if I am near a lake or ocean, I don’t even need to shower as much… So we will see…

Tell the Traveling Mac what you think... be nice now... Cancel reply