Well, folks… after driving until 1 am I found this great little RV park in Geneseo, Illinois. 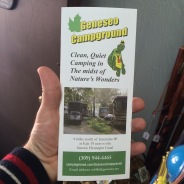 It was around $20 a night, so it was a little expensive, but it was well worth the price.

I was so comfortable that when I was informed it was too dangerous to travel on such a windy day in an RV, I decided to stay… 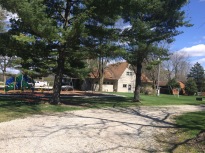 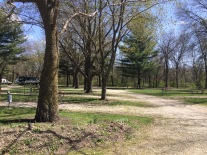 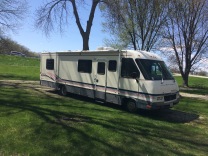 You wouldn’t believe how hard the wind was blowing. My parked RV was rocking back and forth all day. I couldn’t imagine battling such winds going 60 miles per hour on the freeway. I’m glad I chose to stay home.

So with a 120 volt plug in and my propane tank keeping me warm, I decided I would use the endless amount of water to wash my dishes and clean up a little. And of course, I worked on my blog and posted a bunch of days.

For the ones who are not familiar with RVing, at these camp sites you can hook up your electricity and water to their resources. So that’s when you take a nice long, hot shower, which I did and it was fabulous.

The main building sold food and beverages. So, I got my self a microwavable chicken pot pie, a bag of tortilla chips with some melted cheese. I put in a DVD from my “Twilight Zone” box set and relaxed. I didn’t realize how exhausted I was because that one day totally recharged my batteries and by nighttime, I was eager to travel again in the morning.

I had a great conversation with some older folks in the store. They all live permanently in their RV’s. Most of them were very successful in life but hated all the responsibility of keeping up a big house and paying all the bills to keep their lives going. So they downsized their lives and live off of the money they acquired selling everything.

One gentleman told me how he was planning a trip to Israel. Why? Because he can… He said he would have never taken this opportunity if he was living his old life. His new simple life has allowed him to do whatever he likes and he has plenty of money to do it. I think I am going to take the same route when I retire, that’s depending on if I ever do come back from the RV life to begin with because I am loving it now.

Honestly, I’m thinking of forming my own RV gang, who fight the corporations like the rebel alliance fought the Evil Empire in “Star Wars.” But that story is in the making. I need to get on the road and traveling full time before I can start such a rebellious plan but you can bet on this idea coming up again with in the next few months.

What better way to take down this corporate nightmare by down sizing and hitting them where it hurts. Folks… they only survive because we allow them to survive. If we don’t buy their crap and play into their games, then they could never survive. We don’t sound so much like numbers now, do we?

We should never settle for being treated in such ways considering it is us and only us who keep these businesses running. Without us Joe Schmoes, there is no consuming, there is no workers to exploit and the taxes will still be there for us to pay. It’s not like we are not paying most of them now with all the Corporations who send their money to off shore free tax havens. So what does it matter? But that’s an issue I will tackle later. As for now, I am focusing on getting this ship ready to travel for a year. Once the Millennium Falcon is ready to fight then I will start the war… lol.